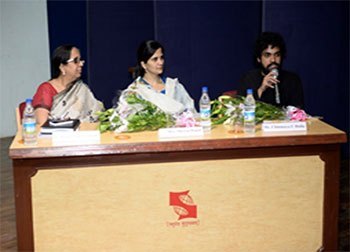 
The eight Millennium Development Goals (MDGs) – which range from halving extreme poverty to halting the spread of HIV/AIDS and providing universal primary education, all by the target date of 2015 have galvanized unprecedented efforts to meet the needs of the poorest from worldwide. The focus of the Symposium was on Goal 2, which pertains to a universalization of education. The speakers invited for the Symposium were Ms. Sheetal Bapat, founder of Shyamchi Aai Foundation and Mr. Chinmaya U Holla, Research Associate, Teach for India. Both speakers gave an insight into the role that non-governmental organizations in India have played in the education sector and the alternative methods of teaching adopted by them. Students interacted with the speakers and policy recommendations for the post MDG era were discussed.

Dr. Mathur has taught at Jawaharlal Nehru University and at Indian Institute of Public Administration, New Delhi and is a recipient of many prestigious awards. Prof Mathur has been a member of the United Nations Committee of Experts on Public Administration 2003-2006 and has worked on consultancy assignments from several international agencies. He has published extensively on subjects such as public policy processes, bureaucracy, decentralization and state-society relations. Among his recent publications are Policy-Making in India (2009), From Government to Governance A Brief Survey of Indian Experience (2008), Panchayati Raj (2013) and Public Policy Making in India How Institutions Matter (2013).

On 17.9.2014, Prof Mathur addressed students and faculty at SSE on the theme of Public policy. In the morning session titled “From Government to Governance: a public policy perspective”, Prof. Mathur sketched out the complex journey from the time Government was about everything to the idea of minimum government and maximum governance. The welfare state with its pronounced responsibility towards the citizens led to bureaucratic multiplication and over time it became difficult to keep pace with the burden of financial responsibility .The government came under scathing criticism for failing to perform its duties and alienating itself from the citizens by practicing a strict control –command system. It was also at this juncture that the notion of public choice underwent critical review and the role of self-interest in public jobs got highlighted. It was realized and accepted that public servants were not above the category of the economic man—maximizers of utility. This and other events, led to a reinvention of the government role to that of steering and not rowing. Power came to be shared and networks of power centers began to develop. Balancing the powers of the government vis-a-vis the other actors such as civil society and markets, became the new challenge of governance. With increased globalization standards and quality of governance also became crucial indicators of good governance apart from the traditional notions of transparency and accountability. Against this backdrop, Prof Mathur went on to link up the theoretical developments in the discipline with examples of governance dilemmas from within India and across the world. The post lunch session delved into the conflicting nature of public policy and contests among the stakeholders. Prof. Mathur elucidated the nature of contestations with the help of live cases—the Delhi Pollution Control issue being a prominent one.The session was also graced by our Hon’ble Vice Chancellor Dr. Rajani Gupte Ma’am who gave the welcome address. Our director, Dr. Jyoti Chandiramani, also shared her valuable insights on the topic. The Lecture was facilitated by Dr.Sukalpa Chakrabarti.